The dedication of Lock 17 on Sunday 20th was blessed with beautiful weather and a great turnout from Gordon's family and friends, along with representatives of many local organisations and groups, most of whom were friends of Gordon too. A short, informal and quite emotional ceremony began with a brief introduction by Peter Clarke, Chairman of Marple Locks Heritage Society. Barbara Mills, Gordon's widow, then thanked everyone for their part in creating this memorial to him and advised that he would have been amazed and delighted to be remembered in such a fine way. Barbara then unveiled the bronze plague and a number of formal and informal photographs were taken to record the event. The ones below were taken by local photographer Arthur Procter. 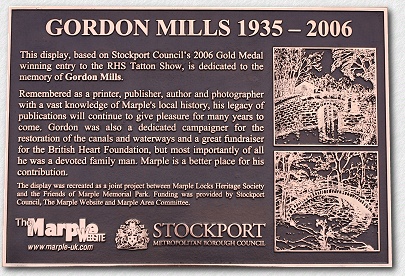 We are pleased to announce that, at long last, the "Lock 17" display on Oldknow Gardens will be formally dedicated to the memory of Gordon Mills.

The delays have been due to British Waterways' concerns for safety relating to the relocation of a large piece of stone on which Gordon's plaque was to be mounted. It would have been possible to mount the plaque in a different way many months ago but Marple Locks Heritage Society have persevered with negotiations because the stone is just perfect for the situation.

The Society's perseverance has finally paid off, and the difficulties overcome, allowing the dedication to go ahead during a ceremony on Sunday 20th September, starting at 11 am.

We hope that the ceremony will be well attended and ask that everyone spread the word about it to people who knew Gordon or enjoyed his contributions to local community life.

The Friends of Marple Memorial Park, Marple Locks Heritage Society and the council's Parks & Recreation Team joined forces today to plant up the new Marple "Lock 17" Flowerbed display in Oldknow Gardens. Approximately 3,000 pansies were used, including red, light blue, violet and a mixed blue with flecks of white called "Beaconsfield" to represent the water running through the locks. This is the winter scheme and it will be replanted in the spring with summer bedding similar to that used at the Tatton Show in 2006 when the display won a Gold Award.

Marple Churches Together also joined in the planting and at one point there so many people they couldn't all get close enough to plant anything! An excellent turnout that showed how easy it can sometimes be to bring out the community spirit of the people of Marple.

The display will be dedicated to the memory of the late Gordon Mills and we now need to think about where we will place the plaque and what should be included on it. We were very pleased that Gordon's widow Barbara came along to help with the planting and it was an emotional moment for her. Gordon's son Stuart and his family also came along and were very pleased with the results, which you can see below.

Wayne Chaisty of Ironwood on Stockport Road has completed the installation of the replica lock gates today, and once again he's done us proud with a really superb job.

Stockport Council's Parks & Recreation Team will complete the landscaping work over the next week or two and then there will be a Task Day on 29th September when the Friends of Marple Memorial Park and Marple Locks Heritage Society will join forces to complete the planting up of the display. At a later date a plaque will be unveiled by Barbara Mills dedicating the display to her late husband, Gordon.

An order has been placed for the replica lock gates with Wayne Chaisty of Iron Wood on Stockport Road. Wayne has worked with the Friends of the Park before on the circular Coronation Bench and he also did the nativity sculpture in Market Street last Christmas. Delivery is expected in around six weeks.

The project has now received planning permission and an order will shortly be placed for the replica lock gates. We look forward to having more good news soon.

Planning permission is required for the display and the application has been submitted by the Council. We hope that it will receive approval soon allowing the project to get underway.

The Parks and Recreation Team have agreed to place an order for the metal replica lock gates and we hope to have more detailed news about this soon.

We are also delighted to announce that the Marple Website will donate Ł500 towards the project, covering the cost of a plaque of suitable quality to dedicate the display to Gordon Mills, a man whose efforts on behalf of Marple's locks and local heritage have been an inspiration to our own activities. Hopefully this donation will also cover any other ancillary costs associated with the project.

are working in partnership with Stockport Council's Parks and Recreation Team on a project to create “Lock 17”, a new permanent display that will promote a positive image of Marple and its locks. It will also demonstrate the teamwork possible between the Council and local community groups, as well as creating an attractive display that people of all ages and backgrounds can enjoy.

The project will turn the Council’s "Marple Locks" Flowerbed display, their Gold Award winning entry to the 2006 Tatton Show, into to a permanent feature at Oldknow Gardens, the green space on the corner of Stockport Road and Strines Road and adjacent to Lock 13 on the Peak Forest Canal.

The largest cost associated with the project will be the fabrication and installation of steel replica lock gates to replace those of softwood and mdf made for the Tatton Show, which were not suitable for long-term display, and were also vandalised when the garden was erected in Memorial Park.

The display will be christened “Lock 17”. A plaque will be installed explaining its origins and dedicating it to the memory of the late Gordon Mills to commemorate his efforts on behalf of Marple, its locks and canals and its local history.

It is planned that the majority of the work to relocate the garden will be undertaken by volunteers from the Friends of Memorial Park and the Marple Locks Heritage Society in conjunction with the Council’s Parks & Recreation Team. We look forward providing regular updates via this web page.

More about SMBC's award winning entry to the 2006 Tatton Show.

Congratulations are due to Stockport Council's Parks & Recreation Team, whose entry in the flower bed competition at the RHS  Show at Tatton Park won a Gold Medal last week. This victory has strong links to Marple as it was our flight of 16 Locks, built in 1804, that inspired the award winning theme. 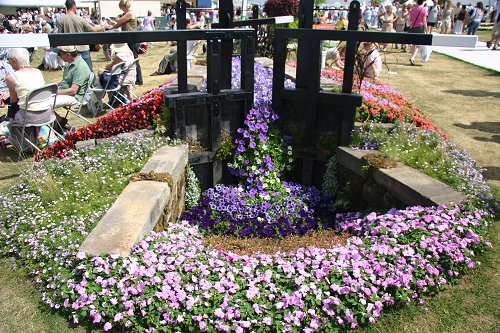 The flower bed depicted a three-dimensional view of a Marple canal lock with water pouring through the gates into the canal below. The display used a cascading range of blue petunia to represent the water and Dichronra 'Sliver Falls' to show the water falling over the lock. Impatiens 'Expo Cherry', 'Expo Wine' and 'Expo Blush were used to surround the main water scene, forming the distinctive shape of the spectacular Marple Aqueduct arches. 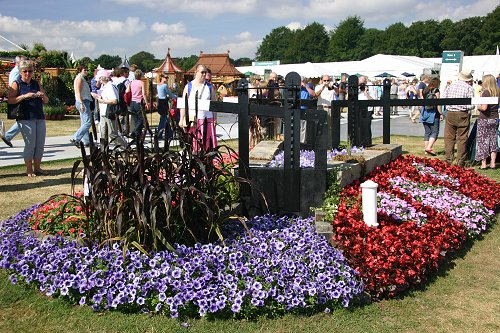 Members of the Friends of Marple Memorial Park and Marple Locks Heritage Society, who manned a stall next to the display each day of the show in Tatton Park, can vouch for the fact that there was huge interest in the Stockport entry and it was easily the most photographed flower bed exhibit. The Society were giving away copies of their newly published Marple Locks Trail - a folding A3 leaflet with map of the locks system explaining key heritage features on-route, plus a potted history of the locks. We at the Marple Website are pleased to have been involved with the production of this leaflet, which complements our Locks Virtual Tour and was funded by Marple Area Committee and Marple Business Forum.