Several years ago, whilst wading in the river Goyt catching stray plastic ducks after the annual Fireman's Duck Race, one of the Firemen noticed a large regular shaped stone lying on the river bed that seemed to have writing on it. It was too deep to read properly, but the word "Bishop" could just be made out. After this discovery Peter Clarke, then Sub-Officer at Marple, revisited the spot when the water level was lower and decided it was either a gravestone or a foundation stone from a local building. 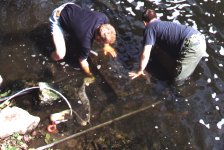 The idea of pulling it out of the water and putting it on display began to take hold and was discussed regularly over the ensuing years, particularly after each Duck Race.

This year, with more time on his hands since retiring from the Fire Brigade, Peter kept a regular eye on the water level. In May 2000 it was at the lowest for many years, the stone was barely a foot underwater and virtually the full inscription could be made out. He decided it was now or never and enlisting the help of several friends from Marple's Active Volunteer Initiative Squad, organised the stone's removal from the river. 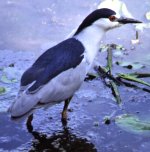 We met by the weir on the Goyt in Brabyns Park at 10.30 am on Sunday 14 May. The Butler was late, but it turned out he had a good reason. He had been distracted on the way by a strange bird wading in the waters of Brabyns Pond. Being a bit of a "twitcher" he recognised it as a Night Heron, a very rare visitor to this country from South Africa. Fortunately Snapper Brindley was on the team with his ever ready instamatic to hand and he was able to take several photographs of the vagrant bird. We discovered later, from the Romiley and Marple Mail, that the Night Heron was ringed and had probably escaped from a private collection. 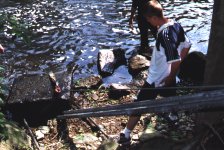 Armed with a borrowed winch and a section of armco barrier previously used as a BMX ramp in the Ringer's car park, we set about dragging the stone out. Getting it to the water's edge was fairly simple, although this revealed that the stone was much thicker and heavier than it had appeared whilst submerged. It was clear that it was much too heavy to lift into a trailer to transport elsewhere and we revised our plans for its new resting place. 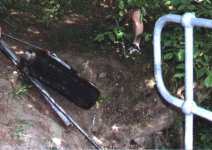 The trickiest part of the whole operation was lifting it past the steep incline between the water's edge and on to the main bank, level with the top of the weir. During this stage the section of armco barrier played a significant part, allowing us to slide the stone over the obstructing lumps, bumps and tree roots that were in the way. Once this obstacle was overcome it was relatively straight forward to drag it to the final position we had chosen next to the old rotting tree stump by the the footpath at the top of the bank.

We propped the stone at an angle on some large rocks to make it easier for passers-by to read, posed for photographs, then headed for the Navigation to celebrate our achievement and discuss how to find out where the stone was from.

The narrative of the quest to discover the stone's origins is now taken up by Bendylegs:

The inscription on the stone reads: 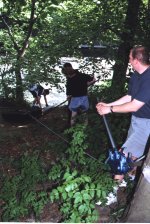 On Friday 12 May, before we had dragged the stone from the river, Jon Bintliff and myself spent a fruitless hour at Glossop Heritage Centre (Why has everyone got a Heritage Centre but us?) reading through the Reporter newspapers of July / August 1896.

On Monday 15 May I travelled to Stalybridge Local Studies Library to try my luck with the North Cheshire Herald of the same period. Unfortunately again, no joy. I then spoke to the office at Manchester Cathedral. Having explained what information I was looking for, the very nice lady there asked me to leave it with her and she would get back to me. When she did it was with the unfortunate news that she could not find anything to help, other than to suggest I trying reading the Manchester Guardian and Courier of the time which I could find on microfiche at Manchester Central Library. 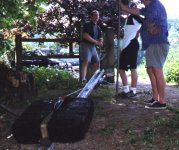 On Tuesday 25 May I travelled to Manchester and gave the Guardian and Courier a good looking at, with mixed success. The Lord Bishop did indeed lay a foundation stone on the evening of 22nd July 1896.......It was at the new Boys School and Parish Institute which was connected with St Augustine's Church, Sampson Lane, MONSAL, Manchester!?!?!?

After further discussion with the Cathedral I decided to try a long shot and phoned directory enquiries asking for St Augustine's Church. There was no such place registered but there was a school. Phoning the school I was lucky enough to speak to a lady who was quite helpful and the bottom line is this: 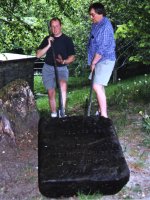 In 1896 the Lord Bishop laid the stone for the new school. Ten years later the area was part of a slum clearance and new houses were built. Later on in the century, around the 60's, these in turn were demolished and tower blocks replaced them. The church etc. remained throughout this time until a major fire, in the 60's, badly damaged it and it had to be demolished.

How the foundation stone from this demolished building in Monsal ended up in the river at Marple Bridge is anybody's guess. One theory is that if one looks at the masonry around the weir in Brabyns Park, it is of a similar type. Perhaps when the weir was being built, and at this moment I don’t know when it was built, they decided to use re-claimed stone and the foundation stone was part of this delivery?

If anybody has any further suggestions I would be glad to hear them but I think that this is where we will have draw this mystery to a close.

The members of MAVIS active on this project are shown below, from left to right, David (Snapper) Brindley, Adrian (The Butler) Taylor, Paul Whittaker, Jon Bintliff, Peter (Bendylegs) Clarke and yours truly, Mark Whittaker, author of this web site. 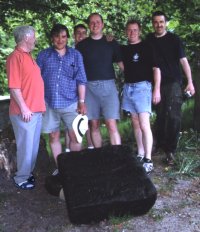 To bring the project to a conclusion, on Sunday 11 May - the day of the Duck Race 2000, we placed a notice next to the stone with a couple of photo's explaining to passers-by where the stone had come from and why we had recovered it from the river. In a way it is disappointing that it has no relevance to Marple's history, which is what we had hoped when we embarked on the exercise, but nevertheless we still believe it was worth the effort of dragging it out.