Take a walk down Brabyns Brow, past the Canal and Brabyns Lodge, beyond Marple Station, now a shadow of its former glory, and past the Lychgate of St. Martin's Church towards Brabyns Park. Today, you'll find it difficult to imagine this as a scene of controversy but if you made the same journey 135 years ago, your perception may have been quite different.

In 1866 Mrs. Ann Hudson inherited Brabyns Hall and its grounds from her cousin, John Wright. John's father, Nathaniel Wright, had purchased the Brabyns estate in 1800 and made many improvements, including extensions to the hall and the erection of an iron bridge to carry the drive across the River Goyt towards Compstall. He also had plans to build a cotton mill in the grounds and commenced construction of a weir, before realising that virtually the entire estate would have to be flooded to provide sufficient waterpower. The partially constructed weir, known as Wright's Folly, remains today.

Ann Hudson took up residence in Brabyns Hall immediately following her inheritance, accompanied by her daughter, Maria Anne and her recently orphaned granddaughter, Fanny Marion. The family were very wealthy and lived in considerable style, with more servants than any other household in the area.

The Hudsons were Anglo-Catholics or 'Tractarians', followers of the Oxford Movement begun in 1833, which had the aim of restoring catholic principles to the Church of England. Unsympathetic to the style of worship at All Saints', which was by comparison plain and unelaborate, the family decided to build a new church where they could worship in their accustomed manner.

Anglo-Catholic worship was regarded with a great deal of suspicion at the time and obtaining permission was not a straightforward matter. Nevertheless, it was granted and Ann Hudson donated the site, whilst Maria provided the funds for the permanent church building. It has often been said that the Hudsons' real motive for building the church was to prevent the expansion of Marple Railway Station. This may have had some influence on the site chosen but it's difficult to believe it was the main reason for a building constructed with such lavish care and attention.

A galvanized iron shed was constructed as a temporary church in 1867 and the family appointed an Anglo-Catholic curate called the Reverend Edward Hayes as the first vicar. He was later to change his name to de la Hey, presumably for the sake of fashion. He first lived in a vicarage called the Manor House, although in 1873 the Hudsons constructed a new vicarage for him next to the canal, on the corner of St. Martin's Road. Although this has been a private house since 1982, a large sandstone panel depicting St. Martin giving half of his cloak to a beggar and another showing the de la Hey crest still reveal its origins.

The Hudsons' permanent church was to be a striking contrast to the temporary iron shed. The scheme was influenced by the Arts and Craft Movement started by William Morris in around 1860, which preached a return to earlier traditional designs and methods. An architect called Edmund Sedding was chosen to construct the church but he only got as far as the initial designs before his death in 1868. The project was taken over by his younger brother, John Dando Sedding, who is now regarded as one of the leading ecclesiastical architects of the Victorian period.

Building of the permanent church began in August 1869 and the corner stone was laid by Ann Hudson in a ceremony held on 9 October that year. The total cost was Ł3,000, including furnishing, the equivalent of Ł148,000 in today's terms. Work was complete in less a year but the consecration service for the new church building and burial ground was delayed until 11 November 1870, St. Martin's Day.

Prior to the opening of the new school building, the day school was run from a lean-to attached to the Manor House. The school also served as a doctor's surgery and town library. The first schoolmistress was Millie Hall, from Stone Row, and in 1873 a cottage was built for her to live next to the school. All this was founded and paid for by Ann Hudson, whose monogram can still be seen on the cottage. The school closed after the war and for a while it was used for a youth club. Today it is the church hall and the cottage is a private home, both of which are grade II listed.

The small organ at St. Martin's is by Henry 'Father' Willis from London, who is now regarded as the greatest organ builder of the Victorian age. A gift from Miss Stevenson of Cotefield on Hibbert Lane, the organ was designed specifically for the church at a cost of Ł220 (Ł10,857 in today's terms) and was used during the consecration service in 1870. Today it remains close to its original condition and is considered to be a superb example of its kind.

When completed in 1870 the original church building was considerably smaller than it is today, consisting of just the Nave, Chancel and Vestry. However, Sedding's plans provided for future expansion and the additions, made in two phases, have complemented the original extremely well. The first of these extensions, added between 1895-96 included the North Aisle and the Lady Chapel. The latter has an incredible gesso panelled ceiling by the designer Christopher Whall, with trees, animals and birds, including flying martins. This has recently been restored under the supervision of Donald Buttress, an architect to places such as the Houses of Parliament, using a colour scheme of silver and gold against a knight blue background and is quite spectacular.

The other major extension was carried out in 1909 and added the St. Christopher Chapel opposite the main door. This includes a huge relief tablet depicting St. Christopher carrying the boy Jesus, modelled in gypsum by the architect and designer Henry Wilson. This memorial to Maria Hudson is so large that the outside wall of the church had to be built out by around three feet to accommodate it.

The stained glass is one of the church's most notable features. The original windows in the Chancel are all by William Morris. Two windows, one by the main door and the other near the font are by Christopher Whall, who was the leading stained glass artist of the Arts and Crafts Movement. Several other designers and styles are featured in other windows, giving many fine examples from a very wide cross-section of this art. 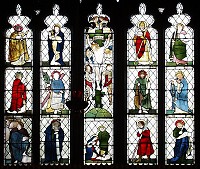 In 1888 a carved oak rood screen was added to divide the Chancel from the Nave. This was designed by John Sedding, who said that he would paint it unless the grain was particularly good. It has a superb natural wood finish, so must have met with his standards.

A bronze relief war memorial, designed by Wilson, was installed in 1924 to commemorate those lost in the 1914–1918 war. The remembrance panel includes the names of four members of the Hudson family and also that of Frank Bradshaw-Isherwood, of Marple Hall.

Many other additions, both major and minor, have been made over the years to enhance this beautiful example of a model village church. These are much more fully detailed in the booklet upon which this article is heavily based - 'A history and guide' to Saint Martin of Tours, Brabyns Brow, published by St. Martin's P.C.C. in 1996. The church also has its own web site at

St. Martin's P.C.C. are justifiably proud of their delightful church and are clearly committed to the preservation and restoration of this fine grade II* listed building. Of course, as the present vicar, Father Ed McKenna would explain, a church is much, much more than just a building.

In 2015 a Heritage Trust was set up at St Martin's to ensure that their Arts and Crafts building and artefacts will be conserved and that they should be available for the public to see. To this end the church is now open every Saturday morning from 10.30am to 12.30pm during spring and summer with guides available to show visitors around. You can find out more about St. Martin's Heritage Trust on their own website here: www.stmartinsheritagetrust.org.uk

If you have anything interesting to share about Marple's history and heritage, please get in touch with Mark using the contacts page.