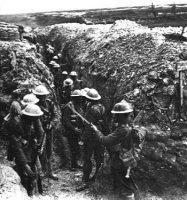 In Aug. 1914 on the outbreak of war, along with the rest of Britain, Marple sent its young men to serve King and Country. During the next four to five years around eight hundred took up arms. Many of them would return with horrific injuries, one hundred and forty-one were destined never to return. Following the war it was decided to raise money by public subscription to honour the memory of these men. After considering various options the committee, comprising of local councillors and dignitaries, decided that the best option would be a memorial park complete with a carved cenotaph. The Carver and Barlow families, who owned land in the centre of Marple, donated a large part of this and offered the remainder at a nominal price. The grounds were laid out with tennis courts and a bowling green for the citizens of Marple to use. The memorial itself was carved from grey marble and the names of the fallen etched in gold. Following the Second World War the memorial was enlarged to allow another fifty names to be added.

Today, except for the tennis courts which are no longer used, the park is well maintained. The bowling green is still a much-used facility with probably the finest views in Marple. The memorial cenotaph still looks toward the cross at Cobden Edge and is the focal point of the Remembrance Sunday services each year, ensuring that the collective sacrifice of lives made in two World Wars are honoured and remembered.

It seems inevitable though, with the passing of so many years, that the individual detail of the lives and deeds of these brave young men have gradually faded from memory. As relatives die or move away and the survivors of those times are diminished by age, there are few left who can remember first hand who these men were. There is a very real danger, in towns and villages across the country, that the inscriptions on many war memorials will become only a list of names, forgotten people with histories lost in the past. Thanks to the special bravery of one dead man and the curiosity, dedication and determination of three living, this danger has been averted for the fallen of Marple.

In July 1996 three local firemen noticed that John S. Collings-Wells had the letters V.C. D.S.O. after his name on the memorial. This signified that he had won the Victoria Cross, the highest possible award for bravery in battle and the Distinguished Service Order. Curious to know how these awards had been earned they embarked upon an investigation, without realising where it would lead. Their initial curiosity satisfied, they started to search for details about some of the other names on the memorial. On discovering that it was possible to trace these men's stories if enough effort was applied, it soon developed into a consuming passion, occupying most of their spare time. This quest for knowledge lead to trips as far and wide as Chester, London and the battle fields of France, as well as uncountable hours in local record offices.

Their success was such that they traced the details of each and every man commemorated on the Marple War Memorial, who fell during the First World War. This is despite the one hundred and forty-first being added on 22 May 1999, only weeks before their printer's deadline. The names have now become "their men" and they talk of them as old friends and comrades. Their devotion to the task has culminated in the publication of the book REMEMBERED commemorating the lives of these Marple men and released on Armistice Day November 1999, to ensure they are now never truly forgotten.

Having spent four long years researching their first book, the authors could have been forgiven for resting on their laurels. However, Jon and Peter were unable to shake off the feeling that the job wouldn't be finished until they had paid similar tribute to the men of Marple who fell during the Second World War. Fittingly, on 10 July 2005 - National Commemoration Day - the pair released their new book, World War II Remembered. This chronicles the lives and untimely deaths of these 50 men, and ensures that they will be remembered too.